My wife loves sleep. Loves it. My wife also loves babies. Loves them. Unfortunately for her, those two things are mutually exclusive. After four pregnancies and newborns to deal with, sleep finally won the war. And so, a little over seven years ago, we found ourselves sitting in the urologist’s office, waiting for my vasectomy consultation. Why write about it now, you ask? Well, I have some friends who have recently gone through this, as well as a few who are considering it at the moment. So consider this a “The More You Know” public service announcement. 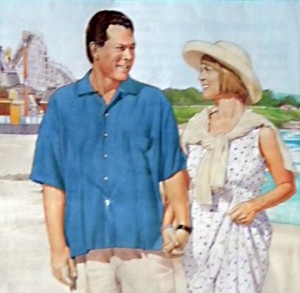 This happy couple can make any medical problem look good.

Okay, back to the urologist’s waiting room: the receptionist handed me all of the required paperwork and I sat down next to my beautiful wife and our little four-week-old surprise that served as the inspiration for this doctor’s visit. The stack of papers was similar to what you get at the doctors’ office before any procedure – a few bad black and white photocopies accompanied by a professional brochure with an illustration of a smiling couple walking hand-in-hand with a title like “The Joys of Amputation.” The paperwork included a list of what preparations you need to make beforehand, and what to expect after the vasectomy is completed. But to me, the most fascinating piece of paper in the stack was the consent form. Consent for the procedure required two signatures: my own and that of my wife. I know what you’re thinking here guys, that my wife could choose to end the life of our child in her womb without even talking it over with me, but evidently I can’t decide what I want to do with my own gonads without her approval. Somehow while fighting for their reproductive rights, women managed to gain ownership of men’s reproductive rights as well. That’s right, even though they reside in my testicles, it would seem that my sperm are only on loan to me.

Well, as I sat there reading through the illuminating literature, I felt a familiar feeling start within me, and the accompanying thought that popped into my head was “Oh no. Not now.” You see, I happen to be prone to an involuntary vasovagal syncope, which is just a fancy shmancy medical way of saying fainting spells. My specific trigger is usually medical in nature; not a fear of anything medical, but rather an overactive visual and tactile imagination regarding medical conditions and procedures. My mind tries its best to mimic what something must actually feel like, and  I visualize incisions, layers being peeled back, tissue and organs exposed, etc. If it goes on long enough, I break out in a cold sweat, my joints feel weak, my ears start ringing, and tunnel vision progresses until I actually lose conscjl;/;g’ ns w

And then I’m back. Woozy, but back. I first remember the feeling from biology class in 9th grade, while watching a video on amniocentesis — the needle was so long, I’d swear they wanted to draw a sample from the bed beneath the pregnant lady, not from her uterus. Fortunately for me, we were in a dark auditorium and I could just put my head down on my desk. In 10th grade, we were watching a slideshow of STDs in health class, and suddenly I was looking up at my classmates from my resting place on the floor. Most recently, it happened last summer at my surgical consult for a small umbilical hernia. The surgeon, a really nice man, was describing the procedure to us, when I finally had to say, “I’m just gonna lie back; you keep talking.” What’s interesting is that having the medical problems or procedures themselves doesn’t bother me at all. My issue is seeing it, reading about it, or just hearing about it. Which is bad, because my wife happens to be a Neonatal Nurse Practioner, and she’ll come home and try to tell me about some patient’s rare condition. If she starts to get too detailed in her descriptions, I have to interrupt. “You need to stop it. Move on to the outcome of your story.” And she stops, because she knows what will happen if she doesn’t. Like that day in the urologist’s crowded waiting room when her husband’s head rolled back, unconscious, while she was trying to calm our newborn baby. Imagine that scene, if you can. I know I like to think it’s all rainbows and sugar sprinkles being married to me, but times like that remind me that being my spouse can be a serious drag.

Anyway, after freaking out my wife, coming to, and drinking some apple juice, we went back to an exam room to talk with the doctor. At this point, the doctor answered any questions we had about the procedure, and performed a preliminary exam. From my point of view, the exam consisted of making sure my scrotum was securely attached to my body by yanking on it like he was doing tricep pushdowns at the gym. This was followed by vigorous pinching until he had determined that I did indeed have two vas deferens in there somewhere. My role was just to grit my teeth and wonder why the hell anybody would choose urologist as a profession. After that, we scheduled a time for the actual procedure and headed home.

One vital process that must be taken care of before the vasectomy can commence is the shaving of the area, either by you or by a trained medical professional. Being a normal guy, I’d rather limit the amount of time a stranger spends by my privates with a sharp blade, so I decided to take care of this part myself. Given the sensitive nature of this act, I managed to finish with no nicks or scratches in only about 10x the amount of time I put into shaving my face. For those of you who have never gone with the “pornstar” look, let’s just say that being smooth down there can be a little breathtaking at first, literally. The sensation is not unlike biting into a York Peppermint Pattie, only in your undershorts (the sensation, not the York Peppermint Pattie). Every move produces an exhilaratingly cool freshness I can so eloquently describe as “Ahhh.” With that out of the way, I went to sleep, focusing on relaxing thoughts such as having a blade cut into my scrotum.

I was told that I could bring my iPod in to listen to my choice of music during the procedure; a cool benefit to modern technology, as doing the crossword in the newspaper wouldn’t have quite the same relaxing effect. Given that option, I created a new Vasectomy Playlist, which I highly recommend: Cuts Like a Knife, The Razor’s Edge, Burnin’ for You, Love Hurts, and the first line of The Christmas Song over and over. As for the procedure itself, it’s incredibly simple and quick. It begins quite shockingly with the cleaning of the nether regions with an antiseptic solution. Is there some benefit to keeping that stuff at 33° Fahrenheit? Does it spoil at room temperature, or something? If not, why not heat it up to 95°? Moving on, there’s the minor sting of the local anesthetic, followed by the sounds of a Dremel tool, followed by some minor tugging down there (or quite a bit of tugging, if your left vas deferens is trying unsuccessfully to hide from its fate, like mine), followed by a little smoke from the cauterization, followed by some stitches. Sit up, stuff some gauze in your drawers, and go home.

My biggest disappointment with the whole thing was definitely the recovery. In my experience, and in the case of others I know who have gone through the procedure, the doctors always oversell the quick recovery time. If you are considering a vasectomy,  please be aware the “two days” recommendation is too short of a time frame. Since that is what I was told, I expected to feel much better after the weekend, but instead I felt like I had recently been kicked in the groin for a solid week. My advice is to take a week off of work and take it very easy for at least the first 4 days. I’d say I was back to 100% after two weeks, and started exercising and being my normal active self again after that.

Even after the dull ache in the crotch fades, you’re still not quite done with the procedure. Evidently medicine is a science, or something, so your doctor wants proof that the surgery actually worked. What that means for us men is we get a hot and sexy date with a plastic cup in a small room at the doctor’s office. This may sound easy enough, especially if you have a plastic cup fetish, but in reality, you can’t help but feel a little self conscious pleasuring yourself around the corner from a crowded waiting room. You don’t get to see the final step, but suffice it to say, it’s somebody’s job to look at semen under a microscope all day. I can’t fathom why my High School Guidance Counselor never brought that one up when discussing possible career paths for me.

So, you might ask, was it worth it? If you have visions of an unending supply of hot and wild sex without birth control, I’m sorry to disappoint you — the reason your wife is not all over you every day is not because she might get pregnant. Most likely it’s because she has used the bathroom after you, and well, enough said. Has our sex-life changed at all? Yes. It has gone from sex with a little bit of pregnancy-fear-based apprehension whenever my wife feels like it, to care-free sex whenever my wife feels like it. For us, probably the biggest benefit in our lives has been our pursuit of adoption. Neither of us felt like our family was finished after baby number four, but we were definitely finished with pregnancies. Lets just say my wife takes to pregnancy like a fish takes to scaling, so we were more than delighted to end that chapter in our lives. But I don’t believe we ever would have moved forward in the adoption arena had we not taken our ability to reproduce off the table, regardless of how much fun reproducing on the table might be. And if all my vasectomy leads to is giving a home to a child in need of a family, then it was well worth it indeed.