A few weeks ago, I was sitting at the kitchen table enjoying a lunch of leftover home-made grilled chicken sandwiches and ice water with two of my kids (numbers 2 and 3). The kids weren’t thrilled about the meal selection, but it was easy, pretty tasty, and best of all, already paid for. They were satisfied. All was good.

My wife and kids 4 and 5 had been out at an appointment followed by an errand. They came home just as we were finishing our lunch, and as they entered the kitchen, child 4 put her cup from Smashburger on the counter. As the loudest of the family, kid 3 erupted first.

“They went to Smashburger?! We had leftovers!”

Every parent has heard this before. If you have many kids like we do, you might hear it a little more often, like maybe every damn day. As a parent, it gets old. Really old. Like that jar of pickle relish in the back of the refrigerator. In fact, complaints about fairness might just be my least favorite thing about parenting, along with children’s complete inability to find anything. Ever. Even when it’s right next to them on the couch. Sorry, that’s a topic for another time.

Back on track now, what is it about “That’s not fair!” that really gets my goat, other than the obvious fact that I didn’t even know I had a goat until now? Well, it’s not so simple that I can just give you a succinct breakdown in list-form so commonly found in super helpful online articles with titles like 5 Reasons Men Cheat or 8 Things Your Hairstylist Won’t Tell You. No, this is a little more complex, so please join me while I unpack this topic somewhat.

Some of the trouble with fairness is in the difficulty of pinning down a definition. Despite what Webster’s may say about it, measuring fairness is an incredibly egocentric, inconsistent, covetous exercise. What fair means to kids is variable to circumstances. Sometimes fair is equal treatment for everyone. Sometimes fair is getting what they’ve earned or deserve. Sometimes fair is appropriate based on age and responsibility. But fair is always, always, about comparing ourselves to others. Unfortunately, my kids seem to make the wrong comparisons.

Consider that my kids were content and satisfied with their lunches before their siblings walked into the kitchen bearing evidence of their time out with my wife. Had that evidence been disposed of before they got home, there never would have been an issue. Teddy Roosevelt’s words “comparison is the thief of joy” strongly apply to this situation. In this case, ignorance truly was bliss. For my kids that day, their comparative analysis of what is fair looked like this:

And so begins the impossible quest for fairness that all parents face, starting with one incredibly self-centered child, and multiplying in complexity with the arrival of each additional incredibly self-centered child. This quest takes bright-eyed, positive, rational, new parents and slowly beats them into submission. At some point, every parent is reduced to a wild-eyed, red-faced, unhinged, trembling ball of frustration, who, like their parents before them, end the idealistic and noble quest for fairness with the spittle-laden exclamation:

This is a true statement. I do want my kids to know that. But the lesson can’t end there. Because telling your kids that life isn’t fair may silence the current complaint, but it leaves them playing the role of the victim in the fairness comparison. You see, while I don’t like that my kids base their happiness and satisfaction and contentment on comparisons, what I despise most is that they actually believe themselves to be receiving the short end of the stick.

Their completely one-sided comparisons lead them to believe that a grave moral injustice is constantly being perpetrated on them. Every comparison is made from the viewpoint of a perpetual victim – they only look up in their comparisons. All they see is the previous chart analyzing lunch fairness. They cannot see that reality looks more like this:

My children – healthy kids with happily married, educated parents, living in a beautiful house in a wonderful middle-class suburban community in the United States of America actually think life is unfair to them.

They truly believe it.

Meanwhile, every day in the western world, children are homeless, are in the hospital battling for their lives against leukemia, and are physically and sexually abused. As I write this, around the world, children are starving, living in landfills, being sold into marriage and sexual slavery, and even beheaded – solely because of where and to whom they were born. Life is most definitely unfair. But life is decidedly not unfair in its treatment of my kids.

And their belief that it is unfair to them creates a revulsion in me that I can’t quite put into words. Hearing their complaints makes me want to scream “How dare you?” into their adorable little faces. They were not born to a family in Syria, in Iraq, in Gaza, in Afghanistan, in North Korea, in Sierra Leone, in Liberia, in Ethiopia, in Mozambique, in Haiti.

As a father, my struggle, every day, is to get them to look down for their comparative perspective. There are approximately 7,250,000,000 people on this planet. How many of those people have the luxury of lunch? With meat? How many have access to clean drinking water? To ice? I would guess that around 4,000,000,000 people alive today will never have a lunch as good as that leftover grilled chicken sandwich with ice water.

Yet my children base their comparisons on the two people they know who had a more desirable lunch than they did. Two. Out of Seven Billion. And in their minds, that is an injustice that simply cannot stand. But they are delusional. They don’t get it. They are blind.

So instead of telling them they’re wrong, I now agree with their assessment – then I push it further in the hopes of opening their eyes to how limited their perspective is.

“We had leftovers! That’s not fair!”

“You’re right. It is totally unfair… that you had lunch today. It’s unnecessary. Nobody needs lunch to survive. Why should you have lunch when billions of other people can’t?”

“I haven’t used the WiiU control pad as much as them! It’s not fair!”

“You’re right. It is totally unfair… that you have a WiiU to play. Not to mention all of these other toys and games. Have you done something special to deserve them? That’s completely unfair.”

“You’re right. It is totally unfair… that you have a bed. With covers and a pillow. And 87 stuffed animals. Some kids live in landfills and survive on trash. Why do you get to live here? So unfair.” 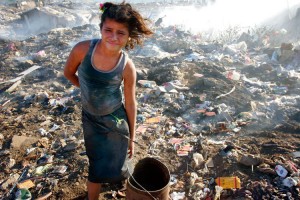 “Bummer about your WiiU control pad situation. That is so unfair.”

Contrary to what my kids may think, that unfair playing field of life does not level out by them getting to eat lunch at Smashburger, or by getting more time with the WiiU control pad, or by getting to stay up as late as their older siblings. Because the world does not become more fair when the privileged get yet another luxury. In fact, it only makes life more unfair to the truly destitute and disenfranchised of the world.

Life can only become more fair through the love, compassion, generosity, and sacrifice of those who have been given much. And I’m guessing everybody reading this blog has been given much, since you are either on a computer or some mobile device operating on electricity and connected to the internet. What’s that, you’re a self-made success story? Did you choose where you were born? Your family? The hardships and struggles that shaped and honed you? The natural abilities and talents that you later refined? Of course not. You were blessed. We’ve all been blessed. We’ve been given far more than we need or deserve. And as my kids would say,