There’s a topic I’ve been intending to write about, but I wanted to wait until I finished an illustration relating to it. It’s been camped out in my head for several years, along with a few other artistic images I’d love to get out; I’m still holding out hope that I’ll put it to paper some day. But writing about it – I just can’t put if off any longer. The topic in question is the story of The Adulterous Woman, from Chapter 8 in the Gospel of John. Not about the controversy regarding the textual history of the story itself, but rather the actual content of the story.

For reference, here is the story (John 8:2-11 English Standard Version): 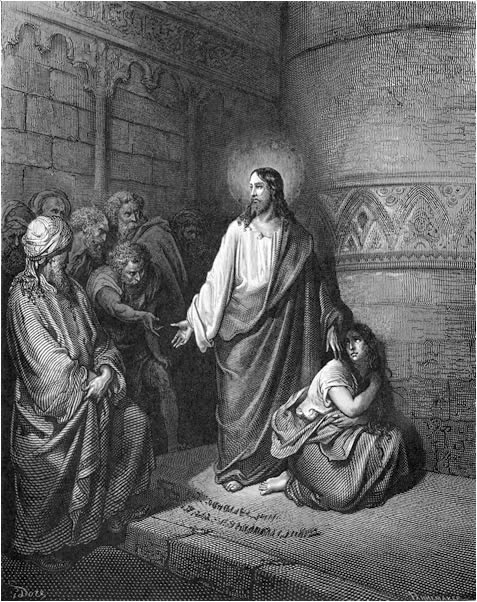 Any excuse to display the art of Gustave Doré.

Early in the morning he came again to the temple. All the people came to him, and he sat down and taught them. The scribes and the Pharisees brought a woman who had been caught in adultery, and placing her in the midst they said to him, “Teacher, this woman has been caught in the act of adultery. Now in the Law Moses commanded us to stone such women. So what do you say?”  This they said to test him, that they might have some charge to bring against him. Jesus bent down and wrote with his finger on the ground. And as they continued to ask him, he stood up and said to them, “Let him who is without sin among you be the first to throw a stone at her.”  And once more he bent down and wrote on the ground. But when they heard it, they went away one by one, beginning with the older ones, and Jesus was left alone with the woman standing before him. Jesus stood up and said to her, “Woman, where are they? Has no one condemned you?” She said, “No one, Lord.” And Jesus said, “Neither do I condemn you; go, and from now on sin no more.”

In the last few months I have come across a few Christian bloggers and commentators that use this story to justify being snarky, self-righteous blowhards towards the general populace. In their minds, Jesus is rubbing this woman’s face in her sin when he tells her to “go and sin no more.” And they must perceive him as a complete prick about it too, as that seems to be the example they’ve chosen to follow. To them, Jesus clearly has no tolerance for her lifestyle and delivers a shameful in your face kind of slam when he says “go and sin no more.”

Yes, he does, but the order of what he says things is important. As much as these modern day accusers want the words of Jesus to be “Sin no more, and I won’t condemn you,” that’s just not what he says to the woman. If that was his intention, he easily could have communicated that. Instead, Jesus phrases it in a way that shows his lack of condemnation is not conditional on her behavior going forward.

And I’m pretty sure her past behavior has no bearing either. The woman in the story happens to be an adulterer. Would it have played out any different had she been a drunk? An illegal alien? A welfare mom? A lesbian? An abortionist? A terrorist? A… socialist? What about a drunk, illegal, lesbian socialist? What then? Surely he would cast the first stone then, right?

No, I don’t think so. By turning her accusers away, Jesus is not trivializing the Law. Jesus is not abolishing the Law. In fact, he’s revealing that it is so important, so good, and so holy that sinners are not worthy to enforce it. Are dirty cops qualified to enforce the law? Are bribed judges qualified to make sound legal judgments? Are corrupt politicians capable of making fair and just laws? Of course not. In the story of the adulterous woman, there is only one man with the credentials, with the qualifications to throw the first stone. And he declines. No matter her sin, I think he would still say, “Neither do I condemn you.”

But what about the woman herself? What do we see her do? What’s interesting to me is what we don’t see her do. She does not ask for forgiveness. She does not say the Sinner’s Prayer. She does not follow the Roman Road. Heck, we don’t even know if she repents. For all we know she is just reliving the memories of her illicit, sweaty, sexy night, while she awaits her sentencing.

And yet she hears “Neither do I condemn you; go, and from now on sin no more.”

The only thing we know for sure, and Jesus knows full-well too, is that she will go and sin again. Since nobody but the man who said it has ever successfully “sinned no more,” I can guarantee that the woman did indeed sin again. So what then? What if the Pharisees brought her back the very next morning having caught her again? What would Jesus say to her?

I can’t imagine him saying anything other than, “Neither do I condemn you; go, and from now on sin no more.”

And the next day?

“Neither do I condemn you; go, and from now on sin no more.”

And again the next day?

“Neither do I condemn you; go, and from now on sin no more.”

How many times would he forgive her? Surely he has a breaking point!

Then Peter came and said to Him, “Lord, how often shall my brother sin against me and I forgive him? Up to seven times?” Jesus said to him, “I do not say to you, up to seven times, but up to seventy times seven. (Matthew 18:21-22)

After 490 times, do you expect Jesus to suddenly jump up and say, “Alright, you’re done, bitch! Finally! Pick up your stones, boys! I got the first throw…”

**Yeah, but he tells her to go, and from now on sin no more! He doesn’t excuse sin! Jesus doesn’t tolerate sin when he sees it, and neither should we!**

Is this what sweeping sin under the rug looks like?

No, he doesn’t tolerate sin. He doesn’t excuse it. He doesn’t ignore it. He doesn’t look the other way. He doesn’t sweep it under the rug. No, he looks it right in the face, stares it down, throws it on his back, and hangs on a friggin’ tree for it. He FORGIVES it.

And in the story of the adulterous woman, Jesus shows us how to deal with his lost sheep. Forgiveness first. Mercy first. Grace first. Love first. Instruction comes after.

If people read that entire story, and their lone takeaway is that Jesus told the woman to “go and sin no more,” I can’t help but feel a little sorry for them. Because in my eyes, they reveal themselves as the sort of hard-hearted, legalistic people who brought the woman to Jesus in the first place – people who accuse others in a desperate attempt to conceal their own sin and lack of love. As a recovering Pharisee myself, I understand all to well. They tie up heavy burdens, hard to bear, and lay them on people’s shoulders, but they themselves are not willing to move them with their finger (Matthew 23:4).

Us under the weight of “Go and sin no more.”

Sin no more is not a matter of obeying a bunch of little rules. It’s about obeying one rule. Love. All God’s law hangs on it. And Jesus fulfilled it. Jesus makes it clear that your actions do not determine righteousness, it’s your motives that count – your heart. What keeps me faithful to my wife isn’t fear of the repercussions of cheating on her, it’s my love for her. Not sinning is not an act of fear or duty, but of love. The more we act through love, the less we will sin, as the two are incompatible.

In the story, Jesus plants the seed of that love that will change the adulterous woman’s life with just five words:

Neither do I condemn you.

Chastising people for their sin and condemning them for it turns no one to the love of Jesus Christ. But when Jesus says neither do I condemn you, he transforms the go and sin no more. It is no longer an oppressive burden or a veiled threat (“Go and sin no more, or else!”), but more of an invitation: Come follow me.

In other words, I forgive you; now follow me.

He showed us how through his example.

And when you fall short, remember his words.

Neither do I condemn you.