Most everyone is familiar with the New Testament story of Saul of Tarsus on the road to Damascus, and his conversion to Paul, who would become the greatest evangelist of Christianity in the ancient world. Thousands of treatises and studies and sermons have been written over the years about the Apostle Paul, his life, his ministry, and his impact on Christianity. This is not one of them.

Perhaps the best known of all of the parables of Jesus from the Gospels is the story of the Good Samaritan. In it, Jesus tells the story of a man, robbed and beaten and left for dead on the side of the road. The story challenges those who believed they followed the commandment to “love your neighbor as yourself” by putting the definition of “your neighbor” into question. Thousands of treatises and studies and sermons have been written over the years about the Good Samaritan and the meaning of Jesus’s message through his parable. This is not one of them.

Instead this is a story of a good neighbor named Paul, a story which easily could have been titled No Good Deed Goes Unpunished.

A few weeks ago, in typical Colorado fashion, we had a brief, one day interlude of cold and snow after several weeks of beautiful and warm spring weather. On the afternoon following the cold snap, the sunshine and warm temperatures had returned. Shortly after my kids got home from school, I looked out into the backyard and something moving caught my eye. On the side of the house of one of our backyard neighbors, I could see water spraying out from the sprinkler system’s backflow preventer. I quickly found my neighbor’s cell phone number and gave him a call. 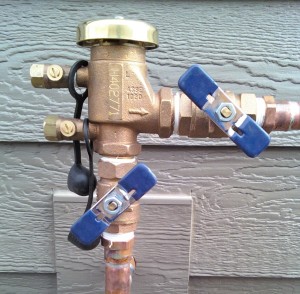 My Road to Damascus

“Hello?” “Hi, this is Chachi Hernandez, your neighbor behind you. Are you home right now?”
“No, we’re in California right now.”
“Your sprinkler’s backflow preventer is leaking. I’m going to run over there and shut off the valve.”
“Oh goodness! Please do!”

So I threw on my shoes, ran out the back door, hopped the fence, carefully made my way across their lawn so as to avoid any dog poo that might be lurking, and finally closed the valve leading to the backflow preventer. Now a little damp from getting sprayed, I shook myself off, and glanced down into the window well next to me. Uh-oh. The leak must have been going on for hours and hours, because that window well was absolutely full of water. To the brim.

I returned home just in time to hear my wife answering the phone.

Thinking that maybe I had misheard him, or perhaps that he had called me “pal,” I went ahead and reported my findings about the window well to him. He thanked me for shutting the valve and we ended our conversation.

A few minutes later, still pondering what had just happened, I heard the phone ring again. It was my neighbor. Sensing the perfect opportunity to perform a test, I answered.

“Hello, this is Chachi.”
“Hey, Paul. We’re going to board our plane in a little bit, and I’d really appreciate it if you could put our minds at ease by going over to our house and checking the water main in the basement to see if there are any other leaks.”

Well that answered that. I had not misheard anything. He was definitely calling me Paul. The seven of you who actually read my blog are well aware of some of the issues I’ve had with my name over the years, as written about here and here. I fully expect people to stumble over my birth name, Jacinto. And I expect people to chuckle at my ridiculous lifelong nickname. But this – this was new. This was an inexplicable substitution that made no sense whatsoever. Chachi and Paul are about as similar as a lawnmower is to mayonnaise. For those of you taking the SAT exams, the analogy might look something like this:

Anyway, I agreed to help out a little more, and I got the garage code from my neighbor so I could investigate further. As I rounded his house and approached his garage, I heard the distinct sound of water spraying and searched quickly for the source. The sound was coming from the house at the very top of the cul-de-sac, one house away from where I stood. I could see water running down their driveway and to the street, and the origin of the spray was the backflow preventer next to the garage. I hurried up to it and shut the valve, stopping the flow. Nobody answered the door, so I couldn’t let the homeowner know what I had done.

Making good on my promise, I ventured back to the first house and went in the garage. If you haven’t ever let yourself in to somebody’s house that you’ve never set foot in before, let me describe how it feels as eloquently as possible:

That sums it up perfectly. It just feels wrong. Like you’re breaking the law. B & E. Maybe I should be happy to know that I could never fall back on a life of crime if business were to tank. I experienced no thrill, no excitement. Just a creepy feeling. Almost dirty. 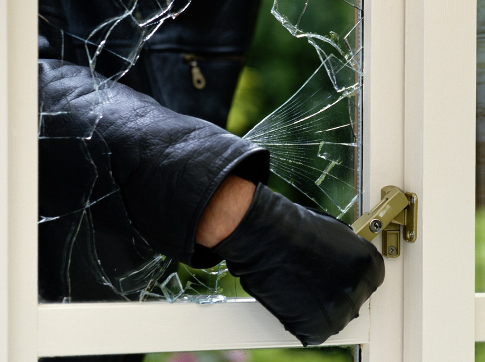 “I swear I’m just being a good neighbor, Officer!”

Trying desperately to ignore the uncomfortable feelings inside of me, I stood in the kitchen for a moment to find my bearings, and then I headed down to the basement. Once there, the first thing I did was locate the water main – which is easy when your neighbor tells you exactly where to find it. Opening the closet door to the water main, I was relieved to find that everything around the main was dry.

My next order of business was to head towards the water logged window well to get an idea of the damage on that side of the basement. Now, I’m no professional home inspector, but I’m pretty sure the technical industry term describing the carpet in the main room of the basement is squishy. Each step I took on my way over to the window well left behind a shoe-shaped puddle as evidence of the complete saturation of the carpet. I checked the walls near the window well, found them damp, and then trekked around the room in all directions to determine just how far the damage had spread. Satisfied with my inspection, I got the heck out of the house so I could start feeling myself again, instead of the cat-burglar or serial killer that had been intruding in a strange, unoccupied home.

Unfortunately for me, feeling like myself again would be extremely short-lived – about as long as it took me to get back to my house and pick up the phone, to be exact.

“Hi, this is Chachi calling you back.”
“Hey, Paul. What did you find in the basement?”

What was going on? Was this some kind of test, or practical joke? How could he possibly be getting my name that wrong? It made absolutely no sense, and this is coming from an expert on having his name butchered by strangers. I went ahead and gave him my report on the status of his basement, and told him of his neighbor’s similar issue and how I had shut off that valve as well. He thanked me profusely and let me know that they would be arriving back in town late that night – now with some degree of peace of mind while in transit. Other than the considerable amount of drying out that they were going to have to do in their basement, all was well and good.

What to do? Now, I have to admit that I am the furthest thing from a loud, outspoken, confrontational person. In fact people who have just met me might even mistake me for a jerk or maybe even a mannequin – based solely on me being about as conversational as your average giant tortoise. So now what? At this point, my wife and I together had given my neighbor ample opportunity to recognize his mistake. Saying I was Chachi 4 or 5 times should be enough to illuminate the little cartoon lightbulb above my neighbor’s head, right? It’s at least enough to raise a nagging question as to why he was calling me something radically different from what we were calling me.

So after saying my own name repeatedly when referring to myself, what comes next? How does one best word that conversation starter?

“Quick question: why do you keep calling me Paul?”

Well, life with a lot of kids quickly distracted me from that concern, so my rumination over the matter was cut short. Only too bad for me. Because having a plan in place would have been great the next afternoon when the doorbell rang. I opened the door to see my neighbor on the front porch. And before I could say a word, he forcefully extended his hand and simultaneously delivered a long, drawn out, multi-syllabic, director’s cut of the wrong name.

I shook his hand as he thanked me over and over again, letting me know that he had told his neighbor that I had turned off the valve to his backflow preventer, too, and that if I ever needed anything to let him know. All the while, the only thought going through my head was something along the lines of I am soooo screwed.

So I said, “You know what you can do for me? You can can stop calling me Paul,” but it somehow came out sounding a lot more like, “You are very welcome; it’s just what neighbors should do for each other.”

In the days following, my kids would come in from the back yard and tell me that they heard our neighbor talking to other neighbors about what Paul had done for him. And we all shared a good laugh over that, imagining the other neighbors wondering to themselves, “Who the hell is Paul?” With luck, The Legend of Paul and his good deeds will spread throughout the neighborhood and the mysterious Good Samaritan will achieve almost mythical status. Heck, I may even make up few stories about Paul to throw people off my trail. Like the time he dragged my drowning kids out of the creek.

Whatever stories you may hear, don’t even think about asking me for help if you ever need anything.

Because the guy you want is Paul.