If you’re thinking to yourself, “Hey, that’s two titles for your posts in the last six months that have been inspired by Polonius’ advice to Laertes in Hamlet (Act I, Scene III),” then I have something to say to you: You are a huge nerd. And that means a lot coming from me.

I would say more about your dorky knowledge of Shakespeare, but I can’t muster the energy.

I was on the driveway, standing in the beautiful sunshine, when my wife pulled in from the gym today. She was bawling.

That must’ve been one lousy yoga class, I thought. Actually, I didn’t think that. I knew exactly why she was crying. This morning had seen another court hearing, and obviously the news was not good. There would be yet another delay before a final decision can be made.

“What’s going on with the adoption?”

Here’s what we’d like to say: Eff Yew. But we don’t because we know they’re good people and they mean well. So instead we spew out our newest rote answer about the latest legal hiccup in the system that’s causing the delay – and while it’s nice to know that people are thinking of us, and as cathartic as it is to vent over the frustrating situation, the conversation is like a knife in the stomach. Because not knowing is the worst. It sounds dumb, but I can’t wait for the harsh struggles of actually integrating a new member of the family. Even the grief and sorrow of never seeing him again sounds better than this.

But I know my wife, and I know her heart. So I know she wasn’t crying for herself; we’re old, two months seems like nothing. She was crying for the wonderful little boy left languishing in the limbo of foster care far longer than anybody should. By the time this new court date rolls around, three years will have passed since his case was first opened. Three years.

That’s just over half of his life.

That’s unacceptable. Being under the age of 6, his case falls under the Expedited Permanency Planning Program in Colorado, the goal of which is to have a child under 6 in a permanent home within 12 months of the initial placement. And yet it seems like the next available court date for a follow-up hearing is always at least two months away. Expedited? Is that some kind of twisted joke?

An expedited case that has lasted half of a boy’s life.

Half a life of fear. Of uncertainty. Of instability. Of insecurity.

We know the details of his case. We’ve pored over his file – an attempt to connect to, empathize with, to understand what he’s been through. And with all that we’ve learned, I can’t begin to imagine what it has felt like for him to live through it. It’s been his journey, and it’s our hope to walk it with him one day.

To be clear, we’re not stupid. Maybe a little crazy, but not stupid. Families that do what we’ve set out to do have to be at least a tad nuts, because on paper it just doesn’t make any sense. So while we might get a little irritated when people ask us why we’re doing this, we can’t deny that we understand why somebody would ask it. We love our family. We love our kids. We love our lives together. So why on earth would we rock the boat now, and potentially capsize all of it? Why would we make waves in our calm, predictable lives? Why would we bring fears and insecurities in us and our kids to the surface? Why would we upset the balance in our relatively smooth homelife? Why would we risk our hearts on a virtual stranger? Why in God’s name would we do that?

Who gave us these lives? Who blessed us with an almost idyllic homelife? With an adoring spouse? With terrific kids? With flexibile work schedules? With a big house? In a great community? With supportive friends and family? 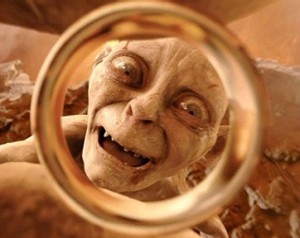 We don’t want to turn into this guy.

But why? Because we’re awesome? Because we’re so faithful? Because we somehow earned it? Because we deserve it? Did he do it so we could horde and worship all of those gifts like Gollum and his “Precious” in the Lord of the Rings?

He did it so we could share the blessing of His gifts with others. Imagine not knowing what real love looks like. Or having a stable home. Or a family. Or security. Or a future outside of violence and gangs and jail. Wouldn’t you share that with a five year old if you could?

We would. Even if it hurts.

And we expect it to. We went into this fully expecting adoption to be hard. It’s hard enough integrating a newborn baby into your life. Every time it happens, there’s another person being displaced, having the reality of their life upended. Babies come with the luxury of allowing life to gradually equalize to the new normal. They are just these little beings that need to be fed and bathed and clothed. But they don’t mess with your stuff yet, or take your toys, or talk back – so by the time they start doing those things, you’re attached to them, and you’re very used to having them around.

Why then are we all so exhausted/discouraged/sad/frustrated/angry/afraid/insecure if we expected this to be hard? I think that, while we fully expected the act of adopting a child to be difficult, we never imagined the path leading to adoption would be so incredibly arduous and draining. We already feel like we’re drowning. And we haven’t even begun with the real challenge.

So, if you pray, pray for our family. If you don’t pray, do whatever it is you do when you learn of people who are struggling, like saying “Sucks to be them!” 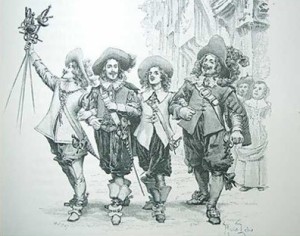 Always trust the wisdom of a man who can’t count to FOUR.(Artist rendering of Athos, Porthos, Aramis, and D’Artagnan, from the Three Musketeers)

In the meantime, we’ll try to stay afloat, to persevere, by reminding ourselves that adoption is a good thing. A beautiful thing. Maybe even a holy thing. It must be to be this difficult a climb just to get there. And as Alexandre Dumas wrote in The Three Musketeers:

“The merit of all things lies in their difficulty.”