A couple times a year, I climb 30 feet up in the beautiful tree in our front yard.

Also, because I’m an idiot. That fact was driven home when a large gust of wind started me swaying at the top of said tree. I’ll admit that, for a second, I feared for my life as I tightly hugged a branch and closed my eyes, just waiting for the wind to die down. Even in the face of that, it was totally worth it: the tree looks beautiful at night.

Opening THE GIFT on Christmas

See, I love Christmas. I love risking death in the tree and on the roof for the sake of pretty lights. I love the look and smell of a real, 10 foot tree in the living room. I love decorating it with my family. When my kids were younger, I even loved redecorating the tree to evenly distribute the ornaments from the two low branches on which they had hung all of theirs. I love stockings and garland. I love wreaths and Christmas music. I love Christmas cookies and egg nog. I love looking for the perfect gift and wrapping presents. I love the look on a child’s face when they open the gift. I love nativity scenes and advent calendars. I love Christmas cards and Christmas crackers. I love singing Silent Night in the candlelight of a Christmas Eve church service. And most of all, I love God-made-flesh, for us; good tidings of great joy for all the people.

But in spite of all that, I just can’t buy into the much publicized War on Christmas. I won’t enlist. If there were a draft, I’d be a deserter. For starters, I’ve already made my feelings on the excessive use of hyperbole known in this post. And the language of the War on Christmas accomplishes two things:

1. Exaggerates the problem to the point of absurdity
2. Shamefully trivializes real war.

Some conservative estimates put the number of worldwide casualties from war for 2013 at just over 100,000. Given that, it takes a lot of nerve to label something as the War on Christmas. What a tremendous insult to all those whose lives have been lost or deeply affected by the conflicts of real war. Now if you happen to be an actual Veteran of the War on Christmas, perhaps one of those who may have been wounded in the 2009 Battle of the Macy’s “Happy Holidays” Advertisement, I offer my sincerest apologies – I meant no offense.

Aside from the ridiculous hyperbole inherent in the War on Christmas, there are other fundamental problems with the concept. Honestly, if what you’re after is keeping sacred the birthday of Jesus, then the church itself is guilty of the single greatest affront to Christmas. See, nobody really knows when Jesus was born, so the church’s decision to co-opt several pagan holidays towards the end of December in and of itself does a great deal to undermine the popular “Keep Christ in Christmas” and the “Jesus is the Reason for the Season” talking points. Researchers of the astronomical phenomenon written about in scripture can point to several possibilities of what may have been the Star of Bethlehem, almost all of which would have occurred during the spring, sometime between 10 BC and 2 BC. The involvement of shepherds in the fields in the Christmas story points to either the spring or fall, but not a winter birth. Based on the temple duties of Zacharias in scripture, and the following descriptions of the timelines of Elisabeth and Mary’s pregnancies, many people feel that this story in the Bible points to a fall birth for Jesus, sometime around the Feast of the Tabernacles. Regardless of what theory is followed, most experts and scholars would agree that the birthday of Jesus was not December 25th. So for those that would raise alarm over the secularization of Christmas to appeal to our modern consumer pop-culture, please remember that December 25th was originally chosen some 1800 years ago mainly to appeal to the pop-culture of that day, thereby “selling” Christmas to as many people as possible. 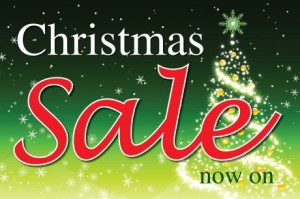 The tradition of the Christmas Sale began when many years ago the church itself sold Christmas for the low low price of several Pagan holidays.

I have to assume that those worried about the secularization of Christmas are Christians. Maybe I’m wrong here, but I can’t envision any Hindus getting their panties in a bunch over things like Season’s Greetings and Happy Holidays. No, I’m betting that if those things bother you, you believe in God, Jesus, and the bible. Yet if you believe in God and Jesus, I’d say there’s a bit of a disconnect of faith somewhere inside you if you’re fighting the War on Christmas. Consider:

“Thus says the LORD, your Redeemer, and the one who formed you from the womb, I, the LORD am the maker of all things, stretching out the heavens by Myself and spreading out the earth all alone.” Isaiah 44:24

“…I will build my church, and the gates of hell shall not prevail against it.” Matthew 16:18

“All authority in heaven and on earth has been given to me.” Matthew 28:18

“Here on earth you will have many trials and sorrows. But take heart, because I have overcome the world.” John 16:33

“You would have no power over me if it were not given to you from above.” John 19:11

“Do not be anxious about anything, but in everything, by prayer and petition, with thanksgiving, present your requests to God.” Phil. 4:5

So if you believe that God is the almighty creator of all things, and that Jesus conquered this world on the cross, are you seriously worried that some local government calling a publicly displayed Christmas Tree a Holiday Tree might shake the foundations of God’s eternal kingdom? That the work of Jesus might somehow fail if a nativity display isn’t allowed at a government building? 1 Timothy 1:15 tells us that “Christ Jesus came into the world to save sinners.” Remember, on the cross, Jesus said, “It is finished” (John 19:30). Paid in full. He won. Game over. It’s done. And it cannot be undone, even by an underpaid seasonal store cashier saying Happy Holidays instead of Merry Christmas. The War on Christmas certainly begs Jesus’ question to his disciples: “Why are you fearful, oh ye of little faith?”

Thoughtfulness. Generosity. Peace. Kindness. Joy. Selflessness. Goodwill. Love. Giving. Friendship. Tradition. Beating the crap out of a stranger in Walmart over the last off-brand low-quality lcd television, ‘cause I saw it first, you sonuvabitch.

Ignoring my joke at the end of the list, what Christians should notice right away is that the list reads eerily similar to the Apostle Paul’s list of the Fruit of the Spirit from Galatians 5:22 (love, joy, peace, patience, kindness, goodness, faithfulness, gentleness, and self-control). Based on that, I’d give the Christmas Spirit a big thumbs up. And I love that so many people truly live out that spirit throughout the Christmas Season. But that’s the problem – not with the Christmas Spirit, but rather the Christmas Season.

Just stop right there and you’ve got it!

Let me put this as clearly as I can: God did not humble Himself to live among us and allow Himself to be nailed to cross to take away the sin of the world so we would live out authentic Christianity for just four weeks out of every year. We sell Jesus short when we proclaim Him as the Reason for the Season, and pay honor to Him for only those four short weeks. Jesus is the reason, period. So it’s fitting that we don’t know exactly when He was born, because in the end, it doesn’t matter. In fact, if we put our focus on celebrating when he was born, we tend to lose sight of the truth of the Christmas story, and that is where he was born. Because not only was Jesus born in a dirty stable in Bethlehem, he was born into the filthy manger of our hearts. His spirit is born within every one of us. And it lives on in all of us.

Do you know what that means?

Every day is Christmas. Everywhere and everyone. Christmas is not a when, but a who and a where. Specifically, Jesus in us. In a word, Emmanuel – God with us. And that is truly good news of great joy for all the people. So get out there and celebrate the Christmas Spirit. Everyday. Everywhere. More Christmas. More Jesus.

Just don’t leave the lights up all year. Your neighbors won’t like that.