We have a problem. And by we, I mean all of us. Or at least all of us in Modern Western Civilization. Not only do we have a problem, we have a BIG problem; quite possibly the biggest problem of all time. In fact, this problem is so huge it could spell the cataclysmic destruction of life as we know it. Is it disease? Worse. Is it global warming? Worse. Is it the Affordable Care Act website? Worse. Is it nuclear fallout? Much, much worse. I’m pretty sure it’s the worst thing ever.

That’s right, the source of our impending doom is a figure of speech. Let’s take a moment to consider just how rampant hyperbole has become in our culture.

Last month, my nine year old son was pouring himself a glass of milk, when he spilled some on the counter.

I stared at him until he noticed me. 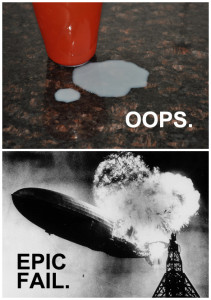 You see, in my house, I’ve heard that word used to describe a milk spill, a piece of popcorn missing one’s mouth on a toss, a botched punt of a soccer ball, doing something cool in a video game, and messing up in a video game, to name a few.

Storming the beaches of Normandy is epic. The construction of the Great Wall of China is epic. Putting a man on the moon is epic. The sinking of the Titanic is epic. The eruption of Vesuvius is epic. A man nailed to a cross for the salvation of the entire world is epic.

Epic demands a certain level of scope and scale. In light of that, I’m pretty sure it’s safe to say – regardless of how excited he is by his virtual success – a college kid sitting on the couch in his parents’ basement playing the Playstation 3 would qualify as just about the exact opposite of epic. So, sorry to burst your bubble, son, but beating the boss at the end of Level 2 does not count as epic. Ever.

And to my other son with the spilled milk, please stop talking like that, too. Because a true epic fail cannot be remedied with a paper towel.

Even our most casual, day-to-day communication is overrun with hyperbole. Consider texting for a moment. Think about what some of these acronyms stand for and how often they are used. I have literally sat next to somebody as they typed LOL in a message. Only guess what? They didn’t laugh out loud. Now, I understand that an acronym for Chuckled Mildly But Kept It All Inside is far less elegant than LOL, but it’s far more appropriate. Honestly, how often do people text or post something that actually causes you to laugh out loud? It’s pretty rare, right? Yet LOL gets thrown around in reply like everybody out there is the second coming of George Carlin.

And OMG and WTF represent language that carries a certain amount of weight to them, don’t you think? To me the phrase Oh My God conjures up images of a tsunami, or a forest fire bearing down on one’s home, or dead bodies in your room, or a serious car accident in front of you. Yet it is now primarily used to express such absolutely staggering occurrences such as “OMG! I just got some new boots!” Likewise, WTF should denote some significant confusion, not every minor thing in the world that doesn’t make sense to you. If you truly need to write WTF several times a day, let’s just say that, mentally speaking, the bulb in your nightlight has burned out.

Every day, we are bombarded with online headlines, many of which are complete hyperbole in an attempt to get us to click on the link. Clicks yield revenue, after all – something I’m well aware of with my readers numbering in almost double digits. I swore off clicking on these headlines after reading an article about Michael Vick a couple of years ago. I use the word article quite loosely here, as it was similar to much of online “journalism,” meaning it was 7-8 sentences about what somebody else said. The headline I read was this:

For those of you who don’t know, Peter King is a very well established NFL writer for Sports Illustrated who has been on the scene for decades. Evidently King had described the Philadelphia Eagles’ play “sloppy and dumb” following a loss to the Buffalo Bills. Oh man, I’m sure Michael Vick was going to let loose and rip this dude a new one! Here was his response:

“Unless you’ve played this game before, I don’t think you can even make comments like that.”

Whoa, whoa, whoa! You better calm down, Michael Vick, before that vicious tongue of yours does some serious damage! I re-read it to make sure I didn’t miss anything. That was the rip I clicked on this article to read? Seriously? Silly me, I was expecting something along the lines of “That fat, ugly, joke of a man is like horse manure that I need to scrape off the bottom of my shoe.” Instead, I got a calm, measured, mature response from a professional athlete. And most importantly, they got their coveted Click-Through, and all it cost them was a minor little thing called integrity. Our modern world places no value on delivering quality substance because revenue is generated with a simple click on a headline, regardless of how misleading it may actually be. Hyperbole is the equivalent of a loud voice – it will get you heard more, but it doesn’t make you right.

It seems to me that more and more, the only things that matter are extremes – a direct result of our cultural hyperbole obsession. Things are awesome, or they’re terrible. Loved it or hated it. Brilliant, or stupid. ROTFLMFAO or Meh.

I know several people that I used to love to discuss films with. Not so much anymore. The big reason for that change is that ten years or so ago, they lost the ability to give a balanced, measured review of something. Currently, all movies fit in to one of two categories, either F***ing Brilliant and Quite Possibly The Best (name a genre of film here) Movie Ever, or That F***ing Sucked. And somehow, illogically, roughly 90% of films fall into the first category. There is no need to defend the merits of something just because you like it. It’s okay to like something that isn’t great; in fact, you can like something that’s downright awful. It’s called a guilty pleasure, and we all have them. So please don’t feel the need to build something up or tear something down that doesn’t deserve it. 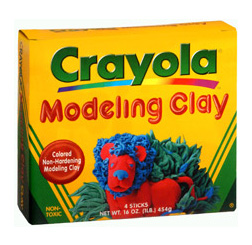 I’m sorry, where can I find the Supermodeling Clay?

Do you remember when the designation Supermodel actually meant something? Something different than just a model? There was a time when Supermodel referred to only the top 10 or so models working in the entire industry. Today, it seems that if you make a living modeling, the media refers to you as a supermodel. There’s no such thing as just a model anymore.

The issue with that kind of hyperbolic labeling is the resulting Boy Who Cried Wolf outcome. When the average either gets rounded up to greatness or rounded down to mediocrity, the extremes start to lose their meaning. As Syndrome – the villain in The Incredibles says, “Everyone can be super! And when everyone’s super… no one will be.”

Like it or not, language matters. It informs our world, and colors our perceptions. If our language ceases to express subtlety, nuance, measure and degree, then eventually our thinking will follow suit. When we only value the extremes, our world views very quickly become black or white, right or wrong, good or bad, strong or weak, positive or negative, success or failure. Unfortunately, the vast majority of life falls in between those extremes. So maintaining those views requires us to either ignore the vast majority of life, or simply whitewash it. In other words, blind yourself to reality, or lie about reality. But doing that comes at a cost. Because when our thinking becomes entrenched in hyperbole, there is no room for discourse, for compromise, for compassion, for contentment.

I think a quick look at our culture and society proves this. How few people do you know who actually seem content in life? We are constantly told that we deserve more. Deserve better. That good isn’t good enough. In fact, it’s terrible. Because it isn’t great. Great is all that matters; everything else is garbage. People who don’t agree with you? Idiots. Food that isn’t delicious? Disgusting. Music you don’t like? Crap. It’s us versus them. This is how we talk now. And how we are spoken to – by people, the media, advertising. This is our culture now. 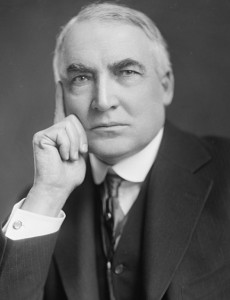 Take a look at the state of politics in our country. Depending who you talk to, our last two Presidents have each been by far the worst President in the history of our nation. Seriously, what are the odds of that? And that somehow, defying all logic, both of the worst Presidents in history got elected to a second term? Can we not hear how ridiculous that sounds? I am not talking about politicians, or pundits, or lobbyists, or the talking heads on Fox News and MSNBC that believe this crazy hyperbole. I’m talking about the constituents; we the people. Read blogs, get on facebook, talk to people. It’s everywhere. We the people actually believe that kind of vitriolic hyperbole. Us versus them. Our position is right. Those who disagree are idiots. Or assholes. Or socialists. Or bigots. How can we expect to find real, meaningful discourse with others when we throw extreme labels around more easily than we do please and thank you?

The answer is, we can’t. Not until we throw off the blinders of hyperbole and wade into the grayness of reality. When we can admit that we’re all shades of gray, that we’re all a mixture of black and white, we can start to see areas of overlap and commonality in all of us. Only then can arguments turn to discourse, and walls turn into compromise.

These things cannot be found in hyperbole. So let’s drop the exaggerations and get real. If we can do that, it’ll be epic.