We recently celebrated our 14th anniversary, so I feel inspired to share some thoughts on marriage. Just about everybody has an opinion about the recent Supreme Court rulings, and here’s mine: I hate the concept of Corporate Personhood. Not the ruling you thought I was about to mention? Probably not. But I’ll bet now you’re thinking. “What the heck does Corporate Personhood have to with marriage?”

I guess it depends on how far Corporate Personhood goes. Please understand, I feel very secure in my marriage. I don’t believe for one second that my wife would rather be married to anybody else on the entire planet. That said, I wouldn’t like my chances if I were competing for her affections with, say, Crate & Barrel. I only wish she would look at me like she does that catalog. Ladies, you know that feeling you get when you’re at a party with your husband, and Chesty McBouncyblouse walks across the room and starts talking to him? That’s how I feel when we’re at a mall with a Crate & Barrel store. Clearly, if taken far enough, the concept of Corporate Personhood could be a serious threat to my marriage. 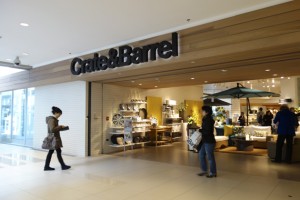 This place makes me nervous.

Now, I’ll admit that’s a pretty broad brush I’m painting with, and that of course there are a few exceptions to my tongue-firmly-in-cheek statement. But seriously, who makes a bigger mockery of marriage, my friends Mark and Tim, or Kim Kardashian? Who undermines the sanctity of marriage more, a committed lesbian couple, or Larry King and his eight marriages? Be honest with your answers.

What makes marriage unique is not that it’s between a man and a woman. That’s just a description of 90% of the romantic relationships on this planet. No, what makes marriage unique is the covenant. That whole “til death do us part” commitment bit. It’s the vow of permanence. The default expectation of marriage is that it lasts forever. That’s what sets marriage apart. So in light of that, the greatest threat to marriage must be something that degrades the specific thing that makes marriage special in the first place. And yet for some reason we focus on who we let “in” to marriage, and turn a blind eye to all of those getting “out” of marriage – while the greatest damage to marriage is being done by those fleeing the institution, rather than those pursuing it.

So, if you take the commitment of marriage seriously, no matter your faith, sexuality, race, socioeconomic level,  you should be able to get married. But if you are prone to being fickle, arrogant, stubborn, selfish, and unforgiving, please stay far away from marriage – because it’s you that makes a mockery of everything marriage is supposed to represent.

Contrary to popular belief, a marriage is not made with the placement of a ring, the cutting of a cake, or even the speaking of sacred vows. Rather, a marriage is made through years and years of living those vows on a daily basis. People think themselves married after the ceremony, whether religious or civil, but that’s just not reality. Truthfully, the marriage doesn’t begin until the first crisis. It’s not until you’ve actually had to make the conscious decision to put the commitment before yourself that you’re finally married. When you stand back-to-back, swords drawn, and together fight down the worst the world throws at you, you are married. Those who divorce at that first crisis are bailing out when it’s just getting real. Make it through death in the family, serious illness, loss of employment, birth of children, crushed dreams — now that’s a marriage! That’s why the bickering over who should and shouldn’t be allowed to marry is ridiculous. Marriage is not about who you are at the outset, but who you become through it, together.

Listen, I believe in God. I believe God is love. And not just any kind of love, like how I love donuts with cream filling. But covenant love. Sacrificial, committed love. And I believe marriage comes from God. In other words, the very source of marriage is covenant love. I believe where love exists, God is present in that place. I believe God put the desire for marriage in our hearts so we could know him better, because the sacrificial, committed love required by marriage is an image of our Heavenly Father’s love for us. Make no mistake, covenant love requires sacrifice. There is no way to love somebody “no matter what” without dying to yourself here and there. Loving that which is perfect is easy — that’s what infatuation feels like. But your spouse isn’t perfect, and neither are you. Infatuation ends when that reality sets in. After that, love becomes a conscious choice: I will love you regardless (so help me God). 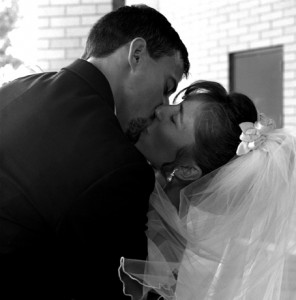 Just Married! We thought we knew what that meant 14 years ago…

That kind of commitment in love is transformative. Because that kind of love in marriage requires patience, compromise, empathy, humility, forgiveness, and self sacrifice. It requires living for another person, and putting their needs and dreams before your own. Living that way over and over again changes the direction of your heart as those traits become more and more natural to you.

14 years later, I can honestly say that I am a radically different man than I was before marriage. Not in personality, or what I look like, or what I like on my pizza, but in the state of my heart. I may have done a good job of hiding it back then, but I’ll be honest, in my heart, I could be a bit of a prick. So much of that old me has died away over the years, and I owe the majority of that to my marriage. Not because my wife is amazingly perfect (sorry, Baby!), but because of the very fact that she isn’t. God uses marriage to refine us. As my pastor said in his sermon titled “Marriage: God’s Sneaky Way to get a Person Crucified”:

God’s plan for you is to kill the prideful self-centered lonely old trophy hunter that is you and then transform you into His own image. And who is He? He is the crazy Bridegroom, hanging on a cross because He vowed Himself unconditionally to us: His unfaithful Harlot Bride.

Life is messy. Marriage doesn’t change that. So when the going gets tough, and it eventually will, you’re left with a choice: die to your old self, or get out. Sacrifice for the sake of another has the capacity to transform you into more of the person God wants you to be. As for divorce, well, the ripping of one life back into two is no doubt its own kind of refining fire as well.

All of that said, if a marriage in covenant love is a powerful agent for positive change and personal growth, it makes no sense at all to me to deny access to those seeking it in good faith. Is it not beneficial for people to grow to be less proud, selfish, stubborn, and unforgiving? If you believe that marriage is an image of God’s sacrificial love for us, why would you fight to keep people from it? God’s sacrificial love has another name, too.