My dear wife is on Facebook, however, and I’ll admit that I’ve taken a look at hers to see what the big deal is. Between that and the few times our oldest son has left his logged-in Facebook page up on my computer, my main takeaway is this:

I make this observation based solely on the number of “selfies” I’ve seen in my few casual glances at social media.

If you’re not familiar with the term, selfies are the relatively new form of self portrait taken with cell phones or small digital cameras that can be seen plastered all over the internet, mainly on social media sites like Facebook and Instagram. In fact, there are over 90 million pictures titled #me on Instagram alone. So add in all of the selfies with other names, and on other sites, and what you’re looking at is a ridiculous amount of lousy pictures.

Selfies are fairly easy to spot due to a few key features. One option for taking the selfie is holding your phone or camera at arms length and taking a picture of oneself. This option delivers three very stylish features: minor distortion to head or face of the subject, called barrel distortion, which often occurs due to the wide-angle-ness of the lens and focal length, among other factors. The other features of this option are a slightly out-of-focus face due to the proximity of the lens and the subject, as well as the sight of an arm extending back towards the body (as it is what is holding the phone). The other common selfie option is taking the picture into a mirror, which delivers the benefit of seeing the phone or camera itself in the picture, as well as some interesting effects from the flash illuminating in the reflection. 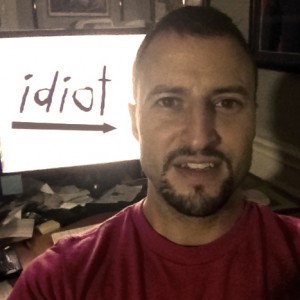 Selfie Tip: Don’t bother to check your surroundings before snapping a selfie! It’ll be fine. TRUST ME!

The inherent problem with selfies is the photographer, and not just because most of us know very little about photography, lighting, contrast, color, composition, etc. The real problem is that we are, by and large, self-centered douchebags. The outcome of that reality is we tend to focus our critical eye on what matters most to us — ourselves. And so, a woman takes a photo of herself in her underwear in the bathroom, and thinks Oh yeah, I look hawt! and posts the picture. Only too bad for her, because the camera can see into the toilet and there is something undesirable floating there. Or two women take a photo of themselves in the mirror of a danceclub bathroom posing all sassy, and they post the picture. Don’t get me wrong, they look sassy and all, but the reflection of the poor woman sitting on the toilet behind them looks anything but sassy. The selfies I just described are real, and unfortunately for the subjects, they now have a life of their own on the internet.

Listen, I have no problem with the idea of self-portraiture. In fact, you’ll find one of me in pen and ink right here on my website. Artists and photographers have been creating them for hundreds and hundreds of years. That kind of self-portrait, though, requires planning and care and skilled execution. These are often done as studies or practice to refine techniques, and let’s face it, there is no easier reference model around than ourselves. As for the selfie, on the other hand, all it requires is an oustretched arm and, well, vanity.

My wife and I went out to dinner with our kids in the spring, and little did we know that it was some high school’s prom, because there were an awful lot of teenagers looking their best at the restaurant that night. From our table, I had a clear view of a booth with two young couples enjoying dinner together. I watched in horror as each couple took turns taking their respective selfies on each side of the table. Surely they could have taken photos of EACH OTHER from across the table, and they would have been better pictures, right? What’s wrong with people that they can’t even ask their friends to take pictures of them?

There are just over 7 billion people in the world. That’s 7,000,000,000. And you can’t find someone to take a picture of you? I’m sorry, but I just don’t buy your having 632 “friends” if you have to take your own photo. Just how “social” are you really if you can’t ask someone (even somebody you know) to take your picture? Engaging in such a deliberate antisocial act as taking one’s own photo for the sake of social media is painfully ironic.

The rise of the selfie raises some questions: did our amazing new technology turn us into self-absorbed monsters, or did it merely give us the means to spew out the conceited depravity that was already lurking deep within all of us? Which aspect of the technology allowed for the growth of our inner-narcissist? Is it the speed with which we can take and view photos now? In other words, would having to wait a day or two to see the developed photos on film give us the right amount of pause before making the images public? Is it the lack of cost required to take 20 pictures in order to get the one that we deem “just right?” In other words, is it not worth the potential waste of money in film and developing costs if the pictures don’t turn out well? Is it the ease of communication? In other words, if we had to put a photo along with a handwritten note in an addressed and stamped envelope, would we most likely share things only with the select few people we feel are an important part of our lives? Did we not do these things in the past because we are impulsive, cheap, and lazy? Well if so, rejoice, because technology has now removed those pesky roadblocks that kept us from doing such important things as sending strangers photos of our phalli.

Imagine, if you will, an Anthony Weiner or Brett Favre type situation taking place before email or digital cameras. I just can’t see a man:

• taking a roll of 36 exposures to Motophoto, with say, a dozen pictures of his parents’ anniversary party, a few of the new puppy, and twenty or so images of his privates.
• thumbing through 20 glossy 4×6 prints, trying to pick the “money shot.”
• composing a handwritten note, expressing a romantic sentiment somewhere along the lines of “I think yer hot — check out my junk.”
• sealing and addressing an envelope, putting a stamp on it, and taking it to the mailbox, perhaps all the way to the post office if he really wants delivery confirmation.

Knowing people, I’m sure it actually did happen back then, but it was probably pretty rare. What about 300 years ago — did it happen then? I’m guessing only the wealthy could have afforded it.

“My dearest Elizabeth, my thoughts are only of thee; as such, I have enclosed a commissioned artist’s rendering of my loins for thine enjoyment.”

Maybe the bigger question is why we believe people actually want to see all of these images of ourselves, whether it’s just our faces, our cleavage, or even our privates. And why do we feel compelled to update or upgrade our existing photo so frequently? Are we that fickle and chronically unsatisfied? One look at our divorce rates should answer that question.

You know what? Nevermind all of this blog post. The more I think about us and our society, the more I realize the average selfie happens to be the perfect metaphor for us as people in today’s world: a distorted self-image, uncomposed, unfocused, and unconcerned with what’s going on around us. If that’s not an accurate description of modern man, then I don’t know what is. Because while we’re endlessly searching for the perfect image of our outward appearance to show the world, we’re somehow rotting on the inside. So maybe what we need is to just stop for a minute and take a good look at ourselves in the mirror to see who we’ve become.

Just put the camera down first.