As a father of four, I’m often asked what advice I’d give to new parents. Sorry, that’s a complete lie. I’ve never been asked that, probably because people take one look at me at think “Whatever he’s doing, it’s not working.” Regardless, if I had only one piece of advice to give expecting parents, it would be this:

Buy stock in whatever company makes your favorite stain remover. 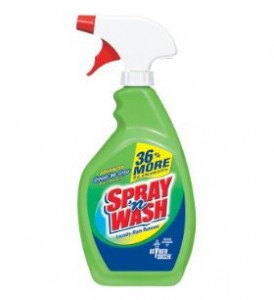 Wait, how do I use this stuff?

I’m serious. Doing so could actually turn your kids into financial assets rather than liabilities. Because you are going to go through an olympic-size swimming pool’s worth of Shout by the time you’re done, especially if you have several kids. I would have used Spray ‘n Wash in the previous sentence, but it’s now just called Resolve, which sounds so snooty and sophisticated compared to the directions-included-in-the-product-name beauty that was Spray ‘n Wash. Nobody ever had to ask the question, “So how do I use this Spray ‘n Wash stuff?” Bad move, Resolve.

Working from home, like it or not, I am always aware of the goings on and the pressing needs with my family and home. And in a household of six people, laundry happens to be a big part of that. Since my study shares a wall with our laundry room, and I’m at my desk or drawing table for hours on end, doing laundry is a task that fits in well with my schedule. So much of the time, when laundry needs to be done, I’m involved in some way or another. Being around all of the time, I take note when my younger son has worn the same outfit four days in a row, and I hear when people make mention of specific laundry needs. I’ve found my older daughter to be quite good about voicing her need for clean clothes, albeit a little late. “I don’t have any clean panties or socks” is not as helpful as “I’ve only got two pairs of clean panties left.” The former means laundry needs to be done now, while the latter allows for a little margin in the schedule, since it means laundry needs to be done in the next day and half or so.

My first experience doing laundry for kids was somewhat different than most, because I didn’t start with those adorable little baby clothes that tend to elicit an “Awww,” every time they’re held up. Rather, I married a single mom, and I jumped into the deep-end of the parenting pool with a nine year old son. When unsure about how to wash something, I love to fall back on the good ol’ directions on the tag. Unfortunately for me, my new son still had some tactile sensitivities, and so the tags in upwards of 90% of his clothing had been removed just so he could tolerate wearing them. Not too big a problem, but what I remember most was being shocked at just how many stains would find their way onto his clothes. And not just the number of stains, but also their locations.

See, kids have a kind of magical power that allows them to spill onto seemingly inaccessible places. Many times I have asked my kids something like we all sat down together and ate lasagna for dinner last night — how did you get sauce on your butt? Or how did your popsicle drip onto your lower back? These things shouldn’t be even physically possible, but with kids, somehow the laws of the universe are bent in ways that allow for things like cherry pie filling to land on the inside of a pair of shorts.

A year or two into our marriage, I found myself puzzled at so many food stains on the shoulders of my son’s shirts. After several loads of laundry and a couple bottles of stain remover with this issue I asked him about it. I don’t know how those are getting there, dad. The problem continued until finally, one night at the dinner table, I watched him turn his head and wipe his mouth on his shoulder. The ensuing conversation went something like this:

Me: We have napkins.
Him: What?
Me: You have a napkin, right next to your plate.
Him: So?
Me: And yet you just wiped your mouth on your shirt.
Him: I did?

He wasn’t even aware he was doing it. We spent the next month breaking him of the habit, using the tried and true method of pointing and blurting out some quick, reactionary — yet communicatively profound — sound like “Neh-!” or “Bla-!” Mercifully, he eventually stopped doing it. To this day he will wipe his spaghetti sauce-covered mouth on a napkin, until it is a gross, wet, orange-ish nightmare. And leave it on the table. But at least he’s been in charge of his own laundry for the last seven years. Now imagine my dismay when a decade later, I caught my younger son turning his head and wiping his mouth on his shoulder. I don’t know if it makes it worse or not, but he knew exactly what he was doing — he was just too lazy to reach for a napkin. Getting him to stop took one question: Are you ready to start doing your own laundry? No surprise that it hasn’t happened since. 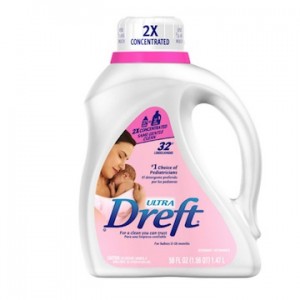 Use Dreft or your baby will suffer!

About the time of the original Shoulder Stain Mystery, we had a baby girl, and let me tell you, babies make laundry an entirely new experience. I didn’t realize this before that moment, but evidently babies have special baby laundry detergents, like Dreft, which I think sounds like an excellent insulting term. According to the manufacturer, Dreft works really well at removing common baby stains like spit-up and urine. Evidently Dreft would work well for babies and frat boys. These special baby detergents eliminate harmful additives that are found in common laundry detergents, like chemical fragrances, colors, phosphates, and high fructose corn syrup. Supposedly that makes them safer for babies’ sensitive skin. I asked my wife, “So if this detergent is healthier and safer, why don’t we use it for all of our clothes?” I thought it was a valid question, but she looked at me like I was a complete dreft.

Aside from the special detergents, babies’ clothes manage to get remarkably dirty, especially when you consider just how little they are. Soft, adorable little outfits double as Swiffer Sweepers while crawling and scooting across the kitchen floor, and an assortment of splatters of both food and diaper blow-outs cover their outfits. And then, you change them into another outfit because it’s only 10:00 AM. In fact, I promise that you will wash onesies that, in terms of mass, are literally more food and poop than actual fabric. With little kids, once in a while you’ll even decide to just cut your losses and throw an article of clothing in the trash rather than begin the epic battle of removing wet poop from a onesie. And to this day, I am convinced that the patent on baby “teething biscuits” is held by Proctor & Gamble, the makers of Dreft. Babies grip and suck on those things until they appear to be some sort of freshly poured lumpy concrete, and the droppings of this bizarre drooly paste seek out nooks and crannies you didn’t even know existed. Especially the crannies, whatever those are. After adding two more babies in close succession, giving us three kids under five years of age, we entered a period of what can only be described, in laundry terms, as hell. Frankly, I’m surprised I didn’t come down with Carpal Tunnel from squeezing the spray bottle of stain-fighter so much. I am not at all kidding when I say that the pretreatment stage of doing laundry took far longer than the actual wash cycle itself.

This dark period of excessive stain spraying lasted about four years, and laundry has definitely grown noticeably simpler in the years that have followed.

I have noticed a disturbing trend in clothing lately. Perhaps I never would have noticed it, but with three lovely, stylish (you’re welcome, honey!) females in the house it just could not be missed: There seems to be a growing number of delicates in our house. Now I’ll admit that as a man, I despise delicates. Sure, they may look cute and hip, but what they translate into is more separate loads of laundry, and a sometimes impossible list of care instructions complicated enough to induce a cerebral aneurysm. If you’re unfamiliar with such instructions, they typically read something like this: 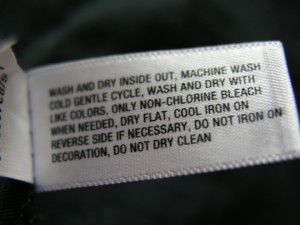 So what would happen if this was dried flat next to unlike colors?

TURN INSIDE OUT, TURN RIGHTSIDE OUT, TURN INSIDE OUT AGAIN, MACHINE WASH COLD GENTLE CYCLE, WASH WITH LIKE COLORS, ONLY NON-CHLORINE BLEACH WHEN NEEDED, CHLORINE BLEACH WHEN NOT NEEDED, REMOVE PROMPTLY, HANG UPSIDE DOWN AND DRY WITH YOUR BREATH, COOL IRON ON REVERSE SIDE IF NECESSARY, DO NOT IRON ON DECORATION OR ANYWHERE ON THE LOWER 3/5 OF THE GARMENT, DO NOT DRY CLEAN, DO NOT ALLOW OILS FROM YOUR SKIN TO MAKE CONTACT WITH GARMENT, GOOD LUCK SUCKER

Almost as a matter of principle, I refuse to wash any delicates. I find myself going through hampers for things to wash, checking tags, and muttering to myself “Stupid Gentle Cycle.” It has gotten to the point that almost 50% of my older daughter’s shirts are delicates. Listen, I understand when a fancy dress or blouse is gentle cycle only. But a t-shirt? A t-shirt is the most utilitarian article of clothing there is. It’s easy. It’s comfortable. Now some fashion genius wants to make it out of some fancy fabric and trim the collar with beads, so I’ve got to wash it on the gentle cycle and reshape and dry flat? It’s a t-shirt! That’s like pimpin’ out a minivan — lots of chrome, custom paint job, special order wheels, 2000 watts to a couple of 15” subwoofers in the back. Guess what? It’s still just a minivan. 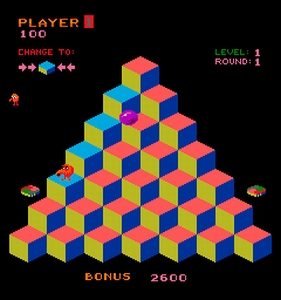 The Laundry Room of the Future!

Among the bizarre laundry heiroglyphs and ridiculous care instructions found on tags, Reshape and Dry Flat may be the most awful of all. When I read that, I look around the laundry room, wondering who the hell has enough room to do that for more than one or two articles of clothing. Anybody? If I were to use every flat surface in our entire house that is not a floor, I still would not have enough places for a full load of Reshape and Dry Flats. If this disturbing trend continues, I will have to remodel our house to look like a level of Q*bert in order to do laundry. And it seems fitting that if that day comes, Q*bert put it best when he said, “@!#@!”

After a gentle cycle, it’s not uncommon for us to have clothes hanging over all of the banisters, hanging over the backs of dining room chairs, kitchen chairs, couches, and even spread out on the coffee and kitchen tables. So if you happen to drop by to see us with our house in that state, please remember, we’re not slobs, we’re just overly delicate.