Another Father’s Day has come and gone.

I know, I know — it’s been a few weeks now. But in my defense, we celebrated it late because we were on vacation on the real date, so maybe it’s fresher in my mind than it is for the rest of you. I must admit that I tend to feel a little bad for my wife since Father’s Day always falls less than two weeks after my birthday. But then I remember that her birthday is barely more than two weeks before Christmas, and then I don’t feel so bad anymore. 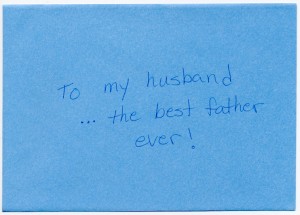 She said it, not me.

Anyway, my dear wife must think I’m a pretty good father, because she never fails to conspire with our kids to make it a wonderful day for me. That said, I have a complaint that comes from being a good father, if that’s what I am.

I work from home. I have a flexible schedule. The result is that I’m very involved in my kids’ lives. I coach their soccer teams. I volunteer at their school. I drive them to gymnastics. I watch tennis matches. I never miss a concert or school performance. You can see us playing at the park, riding bikes, finding books at the library, running errands, shopping for groceries, walking for a fun treat of frozen yogurt. What’s funny is that my wife only works one day (a 24-hour shift) per week, so we’re both around a lot. Together we joke that people in our community must think we’re independently wealthy because we are both around almost all the time.

It’s all good. In fact, it’s amazing. To me there’s just nothing better than pouring myself into these fascinating little people and watching them grow and change every day. They are so odd and sweet and funny and most of all, unique. Parenting is an interesting ride, but I’ve loved everything about it.

There’s one thing I can’t stand, and it has nothing to do with my kids. Rather, it’s about you, ladies.

Several dozen times over the years I’ve heard something like this:

“Did you get stuck babysitting?”

Let me see if I have this straight. If a mother goes to work, she is strong. She is empowered. She is modern. She is independent. She is progressive. She is sophisticated. She is driven. She is successful.

But if a man is actively involved in the raising of his children, he is Mr. Mom? Or a babysitter?

Allow me to clear something up for you. There already happens to be a term for such a man:

Profundity abounds in our house.

And sadly, my experiences tell me that many women out there don’t respect a man who does it.

Aside from that complaint, I have another one about Father’s Day, too. Not about what the holiday represents, or why it’s good to honor fathers, or how my family celebrated the day, but more specifically about the when of Father’s Day. I understand that there’s some history behind why we celebrate the day on the third Sunday of June, but I feel it’s high time to start a campaign to move Father’s Day to another time of year.

For starters, Father’s Day is just too darn close to Mother’s Day. It’s bad enough that historically speaking, Father’s Day truly was an afterthought, becoming a holiday almost 60 years after Mother’s Day, but its proximity to the second Sunday in May seems to only emphasize that fact. With the frantic whirlwind pace of May as most school years come to a close, the holiday actually feels even closer than it really is to Mother’s Day. The end effect comes across something like this: Happy Mother’s Day! Oh yeah… and Father’s Day too. 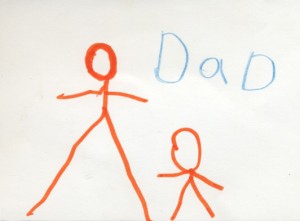 Clearly my son is my spitting image.

Not only that, but the vast majority of schools are finished for the year by the time Father’s Day finally rolls around. So while elementary school kids everywhere are working on cute little projects in class to take home to mom, what do fathers get? Nada. I’m pretty sure my wife received no fewer than five different items from our three younger kids that were arranged by teachers and made at school. Cute little essays about what mom does for me, creative poems about how great moms are, and an assortment of artistic “masterpieces” pay homage to the love of a mother. Listen, I understand that to the detached observer, most of these items are junk. But to the parent, these are priceless treasures, like a slice of our kids hearts poured out through their hands with us in mind. As parents, there truly is nothing sweeter than these hand-crafted cards, letters, and gifts, because it warms our hearts to know that our kids are actually spending time reflecting on us and thinking about us for a few moments, and not just Minecraft. If Father’s Day fell at another time of year, then maybe, just maybe, I’d finally get that lopsided pinch-pot I’ve always dreamed about.

If those reasons aren’t convincing enough as to why Father’s Day needs to be moved, I’ve got another reason that almost every man would agree with me on. You see, there’s one thing that is missing from the middle of June that most men hold near and dear to their hearts: 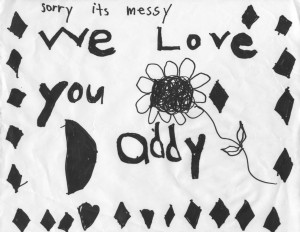 I love the disclaimer at the top.

If you need any evidence that the scheduling of Father’s Day was suggested by a woman, look no further than that. Because no man in his right mind would schedule a day for honoring dads at the one time of year that the most popular sport in the country is not being played. Sorry, baseball, but your time as the “national past-time” was laid to rest years ago. As far as game attendance and television viewership go, football is king in the United States. For sports lovers, what can be seen on the third Sunday in June? Baseball. Golf. Nascar. Only two cities are left to cheer on their home teams in Basketball and Hockey. For me, nothing would beat setting aside a few hours on Father’s Day to watch some NFL football, either on the couch or in the stadium, and I’m sure a lot of dads would agree with me.

And that’s why I’m starting a movement. I want to see Father’s Day celebrated on the Second Sunday in October. For sports, there’s Football, professional, college, and high school. The playoffs have just begun for Baseball. Basketball and Hockey are just getting going. Soccer is nearing the end of the season. Nascar isn’t done yet. The weather’s still nice enough to play golf. Some hunting seasons have even begun then. There’s enough breathing room after Labor Day and before Halloween. Kids are in school and busy making pinch-pots. And most importantly, it’s almost half a year removed from Mother’s Day.